This was a project that I originally did for my Data Warehousing class in grad school using Microsoft SQL server and SSIS. I’ve been taking a lot of datacamp courses lately and wanted to put what I learned about the tidyverse into action. This project has a lot of data manipulation and cleanup tasks, so I thought it would be a good candidate to convert what I did in grad school to R and MySQL. Enjoy!

Using a dimensional model, data warehouse, and Tableau I explored data from the College Scorecard and NCAA Division I FBS football games to create a data-driven approach to school selection for college football fans.

For many students in the United States, NCAA Division I football is an important part of their student life and college experience. It is also my biased opinion that college football is fun to watch, especially when you have an emotional investment in one of the teams playing. Thus, I saw an opportunity to create a data-driven approach to school selection for college football fans.

I am using the available API provided by College Scorecard to extract the relevant school data. The College Scorecard combines data from the Integrated Postsecondary Education Data System (IPEDS), National Student Loan Data System (NSLDS), and various other sources into one dataset and makes it available through an API. The extraction process includes selecting the desired data fields (there are a ton to choose from), determining which years to pull data for, and creating the API call to return the data. The latest full dataset available is for the 2015-2016 school year. I will be extracting the last 5 school years worth of data (2011-2012, 2012-2013, 2013-2014, 2014-2015, 2015-2016).

In R, there is an existing package called rscorecard that “is simply a method for converting idiomatic R code into a properly formatted URL string that is then queried.” This package does require an API key which I requested here. I added the API key to a .Renviron file to maintain security best practices.

Now that I have all of the school and football data, I need to clean it up.

I’ll start with the school data. Overall, it’s in pretty good shape. The main things to do are rename the columns so they are a little more user friendly and decode columns like “CONTROL”, “ICLEVEL”, “REGION”, etc. so that instead of containing numbers they contain what those numbers mean (e.g. a “CONTROL” value of 1 means it is a public school).

I’ll also include the full state name based on the state abbreviation. The decoded values can be found in the College Scorecard data dictionary.

The football data is a bit more messy than the school data. For example, the row headers are sometimes repeated in the middle of the dataset. Also, for some schools the ranking precedes the school name (i.e. “(2) Alabama”). As a part of the cleaning process for the football data, I’m also going to join in the bowl game information and create flags for which games were bowl games and which ones were national championship games.

Now that the school and football data are clean, I’m ready to create the data model.

I am going to store this data in MySQL running on AWS RDS. To initially setup an AWS RDS instance, I loosely followed these directions.

For this project, I’m going to use a star schema. The first step in creating the dimensional data model is profiling the data in order to better understand how the data from the two different sources fits together. During this profiling step, I determined what data types best fit each variable in both data sets and what sizes to make each data type.

I also created the business rules that govern the data:

One tricky aspect of this data set is the conformed dimension. The conformed dimension in the data warehouse between the two data sources is the school name. However, the syntax for school name is different between the two data sources (i.e. Ohio State vs. Ohio State University). Thus, to be able to join the school and football data sets together, I need to perform fuzzy text matching.

Other challenging aspects of modeling this data are how best to handle the dynamic of dimSchool being a role playing dimension, as well as schools sometimes being winners and sometimes losers. I eventually settled on the solution of loading each game into the factGame table twice, with each role through the perspective of each school playing in that game. I also decided to add in a dimDate attribute of school year, and then snowflake it. I did this in order to better handle the grain discrepancy between the football game data (played on a specific date) and the school data (tied to a school year) when trying to report on the two sets of data at once. Having only the school year in the school data created a many to many relationship and snowflaking this dimension solved that issue.

Here is the final data model created in MySQL Workbench. 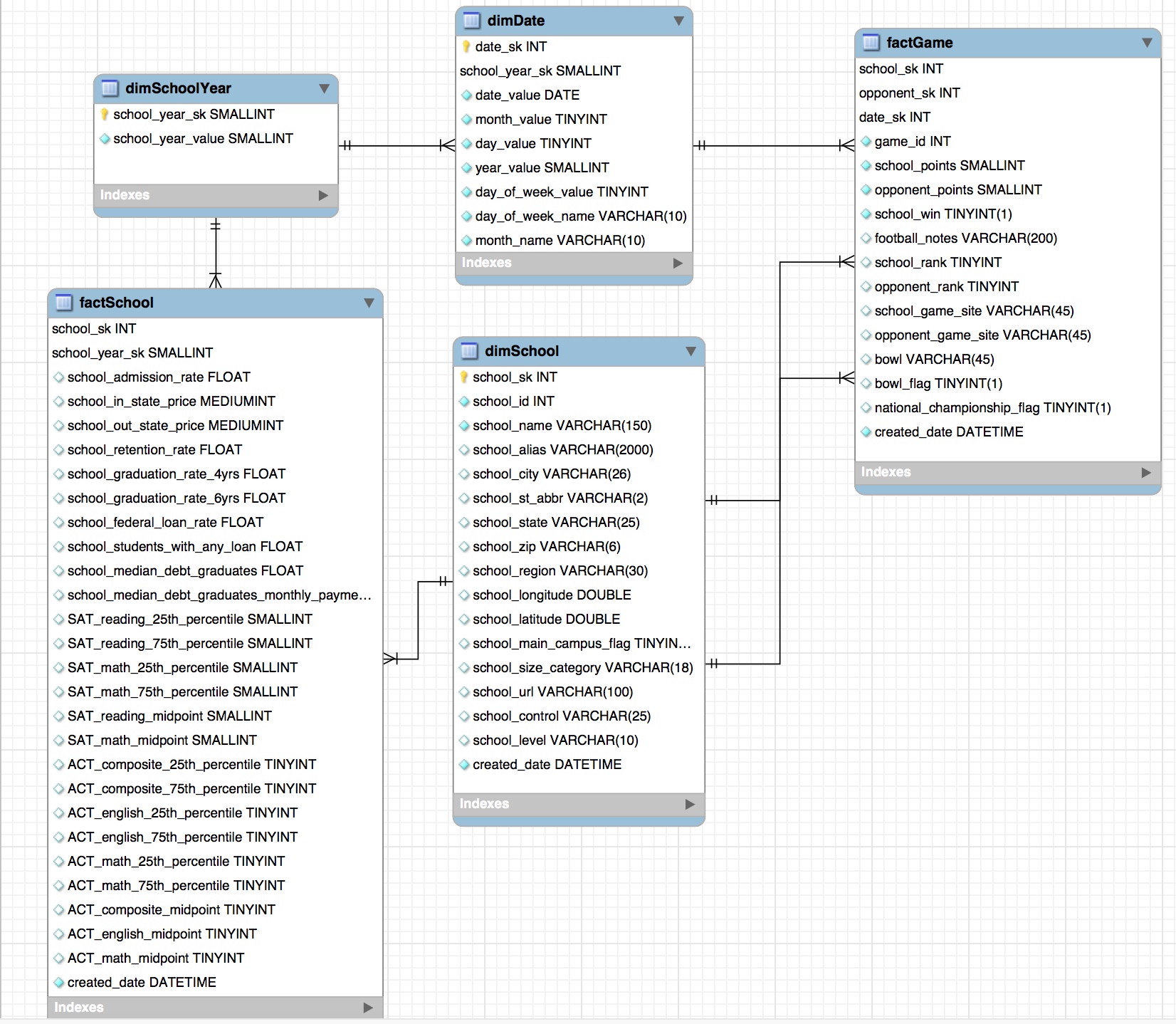 I created a function to perform the fuzzy text matching. One benefit of this function is that it allows the user to concatenate text either before or after the football school name prior to the fuzzy matching. This is important because several of the school names from the football data are shortened (e.g Arizona instead of The University of Arizona). This concantenation can improve the fuzzy matching in some cases.

Now we can filter the data based on the best matches. This is still somewhat of a manual process but the fuzzy text matching is infinitely better than manually matching the strings.

I also concatenated “university of” to the football school names to see if that improved the text matching for the remaining unmatched schools.

All in all, this process does require iteration, filtering, and manual review. In the end, I was able to match 84% of the school names using the output from the fuzzy text matching. The school names that were difficult to match were ones like penn state = pennsylvania state university-main campus or ucla = university of california-los angeles. Eventually I got a final table that matches each of the football school names with the school names from the school data.

During this fuzzy text matching process, I found that I was missing the following from the school data: United States Military Academy (Army), United States Naval Academy (Navy), and United States Air Force Academy (Air Force). According to the Scorecard Helpdesk “College Scorecard data are currently limited to institutions that participate in Title-IV federal financial aid programs. As the U.S. service academies do not participate in Title-IV, the data needed for inclusion in Scorecard are unavailable.” So, I made the decision to go directly to The National Center for Education Statistics to get what data I could for these missing schools. I had to export a csv for each year from the website, which is a fairly painful process because the site is a little tricky to figure out. Below, I brought that data into R and transformed it. The different years had different column orders (of course!) in the exported csv files, so that is why I have missing_school_data_1 and missing_school_data_2.

Creating Tables in the Data Warehouse

From the data model, I want to create the tables in my data warehouse on AWS. To do this I first connect to my database in MySQL Workbench. Then select Database > Forward Engineer. The wizard guides you through the process and generates the necessary SQL to create the database and tables.

Now that my tables are created, I want to load the clean data into my data warehouse. The first step is to connect to my database in R. I put my username, password, and host information into a .Renviron file so I could access it without putting it my code.

Now that I have a connection to the database. I can write the data to it. I could setup the dimSchool table as a type 2 slowly changing dimension, but I decided that I did not need a history of the changes from 2011 to 2015. I found that the changes from one year to the next were minor. Thus, I setup the dimSchool dimension as a type I slowly changing dimension. As a result, you’ll notice that I’m only including the school information from the latest school year that I have, which is 2015.

Before I can load the fact tables, I need to create the dimDate and dimSchoolYear tables and load them into the data warehouse.

In the game source data, one row represents two schools, both a winner and loser. In the data warehouse I want to represent a game from each school’s perspective. Therefore, I loaded two rows for each game and defined the school columns in the table as ‘school’ and ‘opponent.’ This allowed me to load both the winner and the loser into the same column on two different rows. For analysis, this permitted me to obtain data for both winners and losers by querying just one column, either ‘school’ or ‘opponent’.

Now that all of the data is loaded into the database, I’m going to create a view using SQL that will be used for the analysis/data visualization work. If the dataset were larger, I would consider creating a materialized view, but for this amount of data a regular view will work fine.

I am going to start by building a dashboard in Tableau. Maybe if I get ambitious, I’ll build something similar in Shiny. I only have Tableau Public, which can’t connect directly to my database (only the paid version of Tableau allows this). So, I’ll export a CSV file from the view I just created and use that as my Tableau data source.

Users can filter the data based on various fields and then see the corresponding game stats for the filtered list of schools. The user can also select the years they want to view data for and can choose to view the means or medians of the data for the given years selected. A larger view of the dashboard can be found here.